The Golden Triangle North India Tour – 7 Days includes the three well-known and culturallyRICH towns of India – Delhi, Jaipur, and Agra. The tour provides you with many facades of India – from modern fast lifestyle of the cities to the slow and serene pace of the Middle age villages. Especially, the tour focuses on the cultural and personal lives of the Moghul Emperors of India. Visit such places as the Taj Mahal – India’s most visited monument of Love, the colorful town of Jaipur, and the medieval and modern mixture in Old and New Delhi. Also visit various historic and cultural sites like: the tall minarets, palaces, majestic temples and forts that have been delights of travelers since the earliest times.

The Golden Triangle North India Tour – 7 Days starts with arrival and sightseeing of Delhi.  From Delhi, we head for the colorful city of Jaipur. Then we visit Agra of the Taj Mahal fame. The 7 days Golden Triangle concludes at Delhi again, from where you will fly to your onward destination. 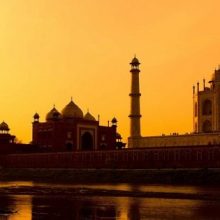 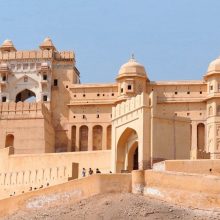 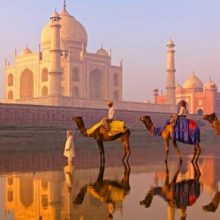 At the airport, you will be welcomed by a representative of Alpine Club of Himalaya. The rest of the day is free and easy, for you to rest, relax, and explore the nearby streets and bazaars of Delhi, India’s largest and capital city. Overnight in Delhi.

We will visit Old Delhi, the seventh city built by Shah Jahan known as Shahjahanabad, which served as the capital of the Mughal Empire from 1638. The Old City, has several architecturally magnificent buildings, built by the Mughals and Turks, such as the Jama Masjid, India’s largest mosque built in 1656, the Purana Qila, a 16th century fortress, Raj Ghat, Mahatma Gandhi’s memorial, the Lotus Temple, a flower like temple that has won many architectural awards worldwide, and the three World Heritage Sites; the Red Fort, the Shahjahan’s palace grounds with massive enclosing walls of red sandstone, Qutab Minar, the tallest brick minaret in the world, and Humayun’s Tomb, the first garden-tomb on the Indian subcontinent.

The New Delhi town, designed to be a symbol of British power and supremacy, took about 20 years to build. Here, we visit Rashtrapati Bhawan, the National Museum that has over 200,000 works of art, both of Indian and foreign origin, covering over 5,000 years, the India Gate, a war memorial archway inspired by the Arc de Triomphe in Paris,  Jantar Mantar, an observatory to compile astronomical tables, and to predict the times and movements of the sun, moon and planets, and Rastrapati Bhawan, India’s Presidential Palace. Overnight in Delhi.

In Delhi, we tour the famous three-storied Laxmi Narayan Temple inaugurated by Mahatma Gandhi, built with red sandstone and intricate designing on its walls and pillars, on 7.5 acres land that includes artificial caves, stone animals, cascading waterfalls, and fountains, and was. We then pay a visit to the 86 foot-high Lord Shiva statue at the Shiv Murti Mandir Complex.

Then we drive to Jaipur, the capital and largest city in the state of Rajasthan. In the evening, we explore the Jaipur Bazar and Hawa Mahal (Palace of Winds), which looks like the honeycomb from a bee hive, built with high walls and lattices for the women of the royal household to observe street festivals, unseen. Overnight in Jaipur.

We explore Jaipur, also known as the Pink City of India, painted pink to welcome the Prince of Wales during the rule of Sawai Ram Singh. Jaipur, the largest city of Rajasthan is an epitome of magnificence and vibrancy that is rich in heritage, culture and architecture, with splendid fortresses, majestic palaces, and beautiful temples.

We will tour the City Palace, an imposing blend of traditional Rajput and Mughal architecture, the vast palace complex occupies nearly one-seventh of the Pink City and is divided into a series of courtyards, sprawling gardens and buildings. It also houses several palatial structures like the Chandra Mahal, home to present Maharajah of Jaipur, Mubarak Mahal, a textile museum, Diwan-e-Khas, hall of private audience housing the two largest silver vessels in the world, Diwan-e-Aam, or hall of public audience, and the gateway Ridhi Sidhi Pol, which has four small doorways decorated with motifs depicting the four seasons.

Other attractions in Jaipur include the Jal Mahal or Water Palace, a Rajput styled architecture palace in the center of the Maansarovar lake, and Jantar Mantar, the UNESCO World Heritage Observatory which was built by Raja Jai Singh. Overnight in Jaipur.

We will tour the Amber Fort in Jaipur, also known as the Amber Palace, known for its artistic Hindu style elements with large ramparts, and series of gates and cobbled paths, overlooking the Maota Lake. Constructed from red sandstone and marble, the opulent palace was home to the Rajput Maharajas. You can also enjoy elephant rides and shop at the various textile stalls.

Then we drive to Agra. En route, we visit Fatehpur Sikri, a beautiful planned walled palace-city founded in 1569 by Emperor Akbar that served as the capital of the Mughal Empire from 1571 to 1585, and includes a series of royal palaces, harem, courts, a mosque, private quarters and other utility buildings. The entire palace-city complex is built from locally quarried red sandstone, known as ‘Sikri sandstone’, with influences from Hindu, Jain, and Islamic architecture. Overnight in Agra.

We will visit the magnificent Taj Mahal, one of the seven wonders of the world, considered to be the greatest Indo-Islamic architectural achievement that incorporates design traditions of Persian and earlier Mughal architecture. It was built as a symbol of love in the memory of his wife Mumtaz Mahal, a Persian princess, by Shah Jahan, the fifth Mughal Emperor of India, on the right bank of the Yamuna River.

We then visit the Agra Fort, a 380,000 m2 (94-acre) fort with a semicircular plan and seventy feet high walls, which is also a UNESCO World Heritage site. Next we tour the Tomb of Itimad-Ud-Daulah’s Tomb, another mausoleum termed as a “jewel box”, and sometimes the “Baby Tāj” because it is regarded as a draft of the Tāj Mahal with walls made up from Rajasthani white marble encrusted with semi-precious stone decorations. Overnight in Agra.

Taj Mahal is closed for public viewing on Fridays.

We briefly visit Dayal Bag Temple, a memorial of Shiv Dayal Sahib, the founder of the Radha Soami Satsang Movement. The 110 feet high marble memorial has architectural structures of a temple, gudwara, vihara and mosque, combining the elements from Hinduism, Christianity, Sikhism, and Buddhism.

We drive to Delhi, and visit Chhatarpur Temple, the second largest temple complex in India and third largest in the world, which is dedicated to Goddess Katyayani.

Your brief journey to the Golden Triangle in North India has come to an end. Representatives of Alpine Club of Himalaya will transport you to the airport.

We explore Jaipur, also known as the Pink City of India, painted pink to welcome the Prince of Wales during the rule of Sawai Ram Singh.