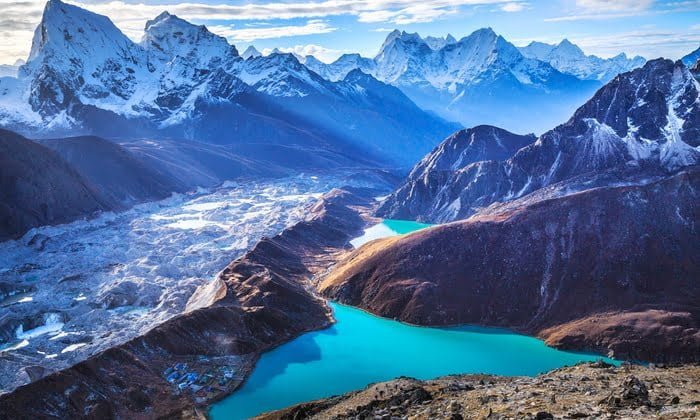 This moderate and short trek towards the Langtang valley offers an opportunity to explore the cultures and traditions of the ethnic group of Tamangs who speak Tibeto-Burman language and trace their roots back to Tibet practicing a form of Tibetan Buddhism, as in our way we will pass by series of Tamang villages in high and isolated region to reach sacred alpine lakes of Gosaikund where thousands of Hindu pilgrims visit the lakes during the full moon festival in August. The lake is also sacred to Buddhists. Gosaikunda is actually the largest of three main lakes the other two being Saraswatikunda and Bhairabkunda. Hindu legend has it that the lakes were formed when the God Siva plunged his trident into the ground in order to obtain water. The Trisuli River has its source in the lakes thus the name. The large rock in the centre of the lake is said to be the remains of a Shiva shrine and pilgrims believe that an underground channel carries water from the lake to the pool at the Kumbheswar Temple in Patan, 60 km to the south.

Your safety is of paramount importance to us at Alpine Club of Himalaya. We have the absolute authority to cancel the trip or change the itinerary, when deemed necessary or when we have reason to believe your safety is at stake. Weather conditions, the health condition of a group member, natural disasters, and such, can contribute to changes in the itinerary when traveling in remote mountainous regions. In these extreme situations, we kindly request that you offer your full co-operation to the trusted leader of the group appointed by Alpine Club of Himalaya. However, we assure you that we will make every effort to keep to the above itinerary.
DEPARTURE/RETURN LOCATION
Kathmandu International Airport(Google Map)
Trip Fact

Go to top
The given cost are per person and exclude international flights.If the given date is not favorable then please contact us and we will happily customize your trip on dates more appropriate for you.
Departure DateImportant NoteGallery
[ninja_tables id=”2699″]
Highlights
Your safety is of paramount importance to us at Alpine Club of Himalaya. We have the absolute authority to cancel the trip or change the itinerary, when deemed necessary or when we have reason to believe your safety is at stake. Weather conditions, the health condition of a group member, natural disasters, and such, can contribute to changes in the itinerary when traveling in remote mountainous regions. In these extreme situations, we kindly request that you offer your full co-operation to the trusted leader of the group appointed by Alpine Club of Himalaya. However, we assure you that we will make every effort to keep to the above itinerary.

Arrive at Kathmandu International Airport where you will be warmly welcomed by our representative and check in to the hotel. The rest of the day is free to explore this historic and vibrant city. Meals: Welcome Dinner

In the morning after breakfast we have a trip orientation meeting after which we head for a drive to Dhunche, 117km from Kathmandu where we need to pay entrance fee to Langtang National Park. Just below Dhunche is the Trisuli Ganga River that flows from Gosaikund. Dhunche has a small Tamang Museum that provides insight into this ethnic group of Nepal. Meals: Breakfast

From Dhunche to Chandanbari is a steep, hard trek that climbs more than 1300m. So we take a short cut down a ravine that rejoins the road at the bottom of the village. We follow the road downhill to reach a level trail that follows the south bank of the Trisuli Ganga eastward through fields and pastures. The trail follows the north side of the river for a short while, then begins the steep climb towards the ridge. After the initial climb the trail levels a bit, passes through the tiny village of Deorali (2660m) and then continues up to the ridge. Now we climb through a forest of firs and rhododendrons and reach a trail junction at Dimsa (3030m). From here we turn right and continue up past an army camp, then up through scrub and oaks to Sing Gompa which is also known as Chandanbari. Meals: Breakfast, Lunch, Dinner

The trail climbs steeply up a ridge with great views of the village framed by snowcapped Ganesh Himal. The area on the northern slope is a sanctuary for the red panda, an endangered species. The trail crosses behind the ridge and stays in deep forests to reach a saddle at Chalang Pati (3550m) after a while. From here onwards we are in the Gosaikund protected area where killing of animals, lighting of wood fires and grazing of goats are prohibited. And through ascending trail with great views we reach Laurebina Yak (3920m). The views are truly magnificent and we can see the Annapurnas, Manaslu (8156m), the four peaks of the Ganesh Himal (with Paldor Peak), some enticing unnamed peaks in Tibet and finally Langtang Lirung. Now the trail ascends into the alpine country above the treeline, up the ridge to a small concrete temple with a statue of Sakyamuni. We continue to goths for views of the waterfalls from the first of the lakes, Saraswati Kund. The trail leaves the ridge and heads high above the Trisuli Valley which is spooky and very dangerous if covered with snow. The trail climbs gently to a spur marked by prayer flags and two rock carvings of Ganesh, as the second lake in the chain, Bhairav Kund, comes into view which is further 35 minutes to the third and largest lake Gosaikund.  Meals: Breakfast, Lunch, Dinner

At Gosaikund there is a Shiva shrine, helipad and numerous stone shelters for pilgrims. Gosaikund which has a black rock in the middle is said to be the head of Shiva. According to legend, Lord Shiva created this high altitude lake when he pierced a glacier with his trident to obtain water to quench his thrust after consuming poison gathered from the churning of the oceans. There is a white rock under the water which is said to be the remnant of ancient Shiva shrine. It is also said that the water from this lake disappears underground and surfaces in Kumbheswor pool next to the five storey Shiva temple in Patan, more than 60 km away. For the best views of the lake we climb the ridge to two viewpoints (4640m) decorated with prayer flags. It is also possible to follow faint trails south from the southeast corner of the lake to a series of smaller half frozen lakes: Dudh (Milk) Kund, Chandra (Moon) Kund, Ragat (Blood) Kund and finally Ama (Mother) Kund along with views of Chhyarkung Chuli peak to the right.  Meals: Breakfast, Lunch, Dinner

This day is a long and arduous day of trekking that we start climbing on a rocky trail from northern side of Gosaikund lake and passing through more small lakes finally we reach Laurebina Yak Pass where we explore the fine views of surrounding hills and large lake Surya (sun) Kund just to the southwest. From the pass the trail descends alongside a stream to reach Bhera Goth from where we should not forget to take lower safer trail because the upper trail has several very steep parts that are extremely dangerous when there is snow and there is no food or accommodation in this trail until we reach Tharepati. Following the lower trail along a rough, knee busting descending route we reach the middle of the valley of Phedi. The concrete chorten beside the Dawa baby is a memorial to a Japanese victim of the Thai airbus crash in 1992. From Phedi the route drops to a stream and then climbs through scrub bamboo to a crest and crossing through difficult rocky trail across moraines and dry streamand then now descending through forests , climbing in and out of ravines below the towering cliff of Thare Danda  we reach Gopte (3440m). Descending from the ridge at Gopte, the trail makes numerous ups and downs across ravines and the boulders of old moraines, then make a final descent to Tharepati where we can climb to the ridge top for early morning views of Dorje Lakpa, Shisha Pangma and a line of peaks all the way to Khumbu. Meals: Breakfast, Lunch, Dinner

From Tharepati we descend steeply through dense pine forest to the appealing village of Magin Goth (3285m) from where we pass many locals hauling bamboo and reach Mere Danda (3510m). After climbing Yurin Danda ridge, the sawtooth peaks above Langtang and Gosaikund soar into view and our trail ducks in and out of fir and rhododendron forest to reach Kutumsang (2450m) and continuing over small pass we descend down the hill to reach the Tamang village of Gul (Golphu) Bhanjyang. Meals: Breakfast, Lunch, Dinner

Passing a gleaming white chorten the path leads to a friendly sprawling Tamang village of Thotong at 2260m. We will have good views of the peaks as we climb up through rhododendron forests to the village of Lapchu Danda (2420m) and descending for 200m past a series of ruined huts and through fields and secondary growth forest to a larger village of Chipling (2170m). Now descending steeply we reach a small chorten at the Sherpa village of Thakuni Bhanjyang from where gentle descent takes us to chhetri village of Pati Bhanjyang (1770m). Finally through muddy zigzagging path with good mountain views the trail continues level among pine plantations to reach Cisopani village. Meals: Breakfast, Lunch, Dinner

Trek back from Chisopani crossing Borlang Bhanjyang (pass) at 2440m and then trek down the Shivapuri ridge to the road at Sundarijal, Kathmandu from where we will be picked up and drop to the hotel. This is a leisure day which can be utilized buying gifts and souvenirs for your friends and family. In the evening you will be invited to join FAREWELL reviewing great photos and share experiences of the trip. Meals: Breakfast, Farewell Dinner

Day 10 Fly back HOME or extend your HOLIDAYS

If you prefer to stay longer, you can consult us for short tours such as game drive at National parks, rafting, mountain biking, Tibet, India or Bhutan tours etc.