Bhutan, the land of the Thunder Dragon is the popular destination for international tourists. It is the last remaining Buddhist Kingdom in the Himalayas. Small yet the happiest country in Asia with unique traditions and culture attracts the tourists to explore its happiness secrets. Amazing mountainous landscape, unique Buddhist architecture, religious festivals and delightful and loving people always welcome you to this wonderful heaven.

We have different holiday and tour packages that match with your time and budget. We just want you not to miss this happiest Land and enjoy their happy lifestyle in your life.

Why Travel with Alpine Club of Himalaya? 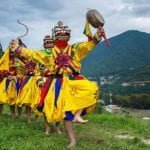 Day 1:  Paro to Thimphu (2300m) (L/D)
You will be flown to Paro, Bhutan. Enjoy the scenic view of the Himalayan range. Upon arriving at Paro International Airport Bhutan, The land of the dragon, you will be greeted by your guide.

To acclimatize your body with the altitude, will be doing very light sightseeing. You will be driven to Thimpu, through Paro valley. Do not miss out the silvery Pa Chu (Paro River) meandering its way through the thick forested ravine, the Paro Dzong (fortress) and Ta Dzong (watch tower).

Later in the afternoon, we will visit Tashicho Dzong which is a beautiful fortress and monastery which houses the Secretariat building, King’s Throne room and other government’s offices. It is also the summer residence of chief abbot or spiritual leader Je-Khenpo. We can visit the Handicrafts Emporium to see or buy a wide assortment of beautifully hand-woven and crafted products including the famous traditional thangkha paintings.

Then, we will move to the memorial chorten which is a beautiful stupa built in the memory of Bhutan’s third King. The paintings and statues inside the monument provide a deep insight into Buddhist philosophy.

Thimpu is the capital of Bhutan. It has approximately 90,000 people and a very much laid back town. The wide streets that are lined by trees give you a relaxed feel. Early in the morning we will take a 15minute guided walk to the Memorial Chorten. The shrine was built in the memory of the late king, Jigme Dorji Wangchuk, who has wished to erect monument to world peace and prosperity. Many Bhutanese will stop by here every day to pray. Memorial Chorten continuously circumambulated by people, murmuring mantras and spinning their prayer wheels.

Later in the day, we will start our sightseeing by visiting the Zilukha Nunnery at the outskirts of Thimphu. 70 nuns lives there and run their daily chores in the nunnery. It is a magnificent view from this nunnery. Then the tour will visit the Changangkha Lhakhang. Later we will visit the traditional paper factory. We will learn how paper is done from the daphne plant. The factory does produce a unique type of opaper called the rice paper, it is said to last loonger than the normal paper.

Evening drive past Trashichhoedzong, “fortress of the glorious religion”. This is the center of government and religion, site of monarch’s throne room and seat of Je Khenpo or Chief Abbot. Built in 1641 by the political and religious unifier of Bhutan, Shabdrung Ngawang Namgyal, it was reconstructed in 1960s in traditional Bhutanese manner, without nails or architectural.

In the morning you will be driven to Punakha, it is an old winter capital of Bhutan. On the way we will drive up to Dochu-la pass, stopping briefly here to take in the view and admire the chorten, mani wall, and prayer flags which decorate the highest point on the road. If the skies are clear, you will be able to view the the following peaks (left to right): Masagang (7,158m), Tsendagang (6,960m), Terigang (7,060m ), Jejegangphugang (7,158 m ), Kangphugang (7,170 m ), Zongphugang (7, 060 m ), a table mountain that dominates the isolated region of Lunana – finally Gangkar puensum, the highest peak in Bhutan at 7,497m.

Later we will continue our journey to Punakha valley and visit the Punakha Dzong. It was built strategically at the junction of Pho Chhu and Mo Chhu rivers in 1637 by Shabdrung Ngawang Namgyal to serve as the religious and administrative centre of the region, Punakha Dzong has played an important role in Bhutan’s history. Damaged by four catastrophic fires and an earthquake, the Dzong has been fully restored by the present King.

If possible, we can have your picnic lunch planned at Chedebji Chorten (Stupa) which is patterned after Swayambhunath in Kathmandu. A lama named Shida is said to have been behind the construction, which was undertaken to pin down a mischievous local spirit. It is a popular picnic lunch and pilgrimage for Bhutanese driving east-west road.

After breakfast, we will drive west via dochula pass 3080 m, weather permitting we will enjoy the Bhutan Himalaya peaks above 7000 mts.

Upon reaching Paro we will visit Ta Dzong, once a watchtower, built to defend Rinpung Dzong during inter-valley wars of the 17th century, Ta Dzong was inaugurated as Bhutan’s National Museum in 1968.

Afterwards, we can walk down a hillside trail to visit Rinpung Dzong. Built in 1646 by Shabdrung Ngawang Namgyal , the first spiritual and temporal ruler of Bhutan, the Dzong houses the monastic body of Paro, the office of the Dzongda (district administrative head) and Thrimpon (judge) of Paro district.Overnight at the hotel in Paro.

print
Bhutan, the Land of the Thunder Dragon, is no ordinary place. This is a country where buying cigarettes is illegal, where the rice is red and where chillies aren’t just a seasoning but the entire dish.